The REAL NOAH'S ARK : What about the FLOOD WATERS ? 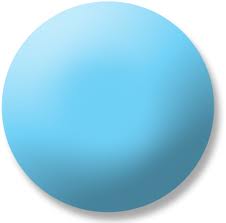 Noah's flood ....The REAL NOAH'S ARK : What about the FLOOD WATERS ?
Many people when considering the historical record of the global worldwide flood , which deluged our entire planet some 4500 years ago ,  that we read about in the history book of the world , the Bible , Genesis chapters 6 - 9 http://www.biblegateway.com/passage/?search=genesis%206-9%20&version=KJV have problems with understanding how our planet could have been covered enough in water to destroy all of humanity , land animals and birds except for those aboard the Ark , Genesis 7:22-23 Everything on the dry land in whose nostrils was the breath of life died. 23 He blotted out every living thing that was on the face of the ground, man and animals and creeping things and birds of the heavens. They were blotted out from the earth.
Only Noah and His family survived and those animals that were with him in the ark.
How big was the Ark ? http://gen1rev22.blogspot.com/2012/02/real-noahs-ark.html
If we stand back for a moment and take the time to inspect a world map or world globe we can see the waters that are observable cover much more of our planet than the dry land  areas of our planet . So it becomes easier to see the potential for our planet to be deluged in water when we take in to account this factor .
BUT , we are also told that the waters we observe were not the only waters that were used to cover our planet during this global worldwide flood . We are told within the Genesis account that the "GREAT FOUNTAINS OF THE DEEP BURST FORTH" Genesis 7:11b  ....on that day all the fountains of the great deep burst forth..........................(underground water , deep subterranean waters , deep primeval oceans etc)
Also " THE WINDOWS OF THE HEAVENS WERE OPENED " Genesis 7:11b .....the windows of the heavens were opened............
We are told that it rained upon the Earth for forty days and nights Genesis 7:12 And rain fell upon the earth forty days and forty nights.
We are also told that the flood waters prevailed upon the Earth for 150 days , Genesis 11:24  And the waters prevailed on the earth 150 days............
This is obviously a combined time for the forty days and nights of the rains falling from the heavens and the 150 days of the fountains of the great deep bursting forth , These 150 days starting from when Noah and His family entered the Ark Genesis 7:11-13   In the six hundredth year of Noah's life, in the second month, on the seventeenth day of the month, on that day all the fountains of the great deep burst forth, and the windows of the heavens were opened. 12 And rain fell upon the earth forty days and forty nights. 13 On the very same day Noah and his sons, Shem and Ham and Japheth, and Noah's wife and the three wives of his sons with them entered the ark,
We read also that the waters of the flood covered the highest mountains to a depth of some 15 cubits = 22 ft Genesis 7:19-20 Finally, the water covered even the highest mountains on the earth, rising more than twenty-two feet[h] above the highest peaks.
( It must be noted that the geology , topography , climate and metereology of our planet would have been very different before the worldwide flood to what it is today and has been since the global flood approximately 4500 years ago .)

CLEARLY A GLOBAL EVENT .
So , after taking into consideration all of the above factors that we are informed about from the historical narrative in the book of Genesis we can more understand the process by which the waters of the global worldwide flood did cover our planet some 4500 years ago .

2 PETER 3:3-7 knowing this first of all, that scoffers will come in the last days with scoffing, following their own sinful desires. 4They will say, “Where is the promise of his coming? ( JESUS CHRIST 2nd COMING ) For ever since the fathers fell asleep, all things are continuing as they were from the beginning of creation.” ( UNIFORMITARIANISM theory of EVOLUTION ) 5For they deliberately overlook this fact, that the heavens existed long ago, and the earth was formed out of water and through water by the word of God, ( SUPERNATURAL CREATION ) 6and that by means of these the world that then existed was deluged with water and perished( NOAHIDIC GLOBAL FLOOD OF GENEIS ). 7But by the same word the heavens and earth that now exist are stored up for fire, being kept until the day of judgment and destruction of the ungodly.( FINAL JUDGEMENT ) .
brackets added ..... 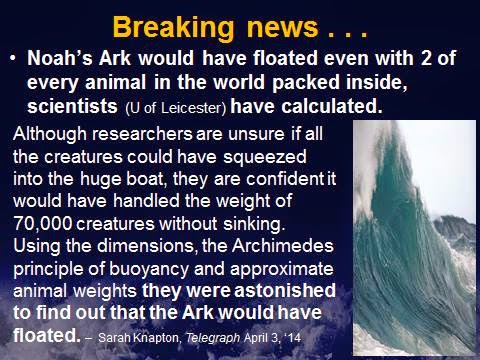